I know that I have been very quiet on here for the past several weeks. Mostly this is because I’ve been busy with other writing projects (both some dry academic stuff and a bit of comics criticism for the Danish magazine Nummer 9), but that is of course no excuse. So here is finally another update, this time a review of Michel Fiffe’s stunning Copra Compendium, which I picked up at MoCCA this weekend and tore through over the past couple of days.

I admit, there was a pang of fear at first. It only lasted a second. Then it was a straight up panic attack. Walls caving in, shortness of breath, hard to ride out.

Then I realized how much freedom there is in being so screwed. 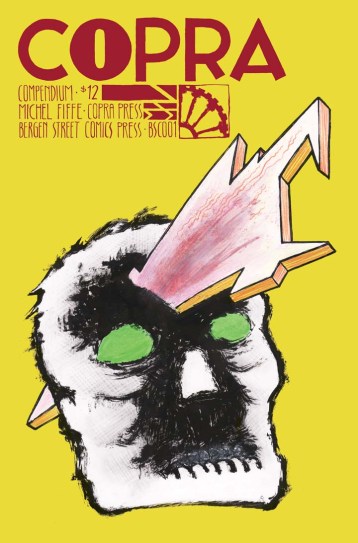 Michel Fiffe‘s self-published series Copra has been coming out on a regular basis since the first issue hit stands in November of last year, and it has received quite a bit of buzz in the comics blogosphere (if that’s a real thing, and not just something crazy people on the internet like to refer to). This new volume, the first Copra Compendium, is a collection of the initial three single issues and also happens to be the first title published by newly minted Bergen Street Comics Press. The book itself is a sweet 72-page package, printed on nice paper stock and displaying sharp colors and a refreshingly small amount of wasted pages (that is to say, none). The art style is familiar to anyone who’s read Fiffe’s other work, and the plot and story structure is quite similar to his previously published Suicide Squad homage Deathzone!

The story, then, is not surprisingly reminiscent of the old Suicide Squad tales, but it goes well beyond that, drawing on a myriad of different genre comics for inspiration. It revolves around a small band of misfit mercenaries finding themselves far past the point of no return, as a seemingly routine pick-up-and-transport-an-occult-extradimensional-space-shard-lodged-in-a-decapitated-head assignment quickly turns sour with the arrival of an unmistakable villainous band of fellas. And this is all before we meet Dy Dy the Neophyte Crime Empress (literally a brain on legs), to say nothing of the dimensional portals or the chaos golem. 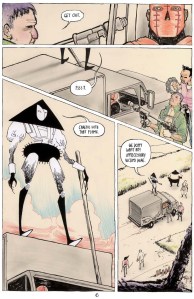 Whereas the first issue is a fairly straightforward set-up piece, albeit with the twist of introducing a number of characters only to gleefully kill off half of them before the end of the 24 pages, the next two take a decidedly weirder turn. The tempo is fast-paced throughout, and Fiffe’s art really excels in conveying the feel of kinetic energy so necessary for an action-packed piece like Copra to succeed. Furthermore, he instills enough imagination and vibrancy into even minor characters to bring them alive on the page, providing the sort of playful thrill that is needed to create a strong bond between reader and story, even when the latter gleefully spins out of the bounds of anything that might ressemble a space of plausible realism. 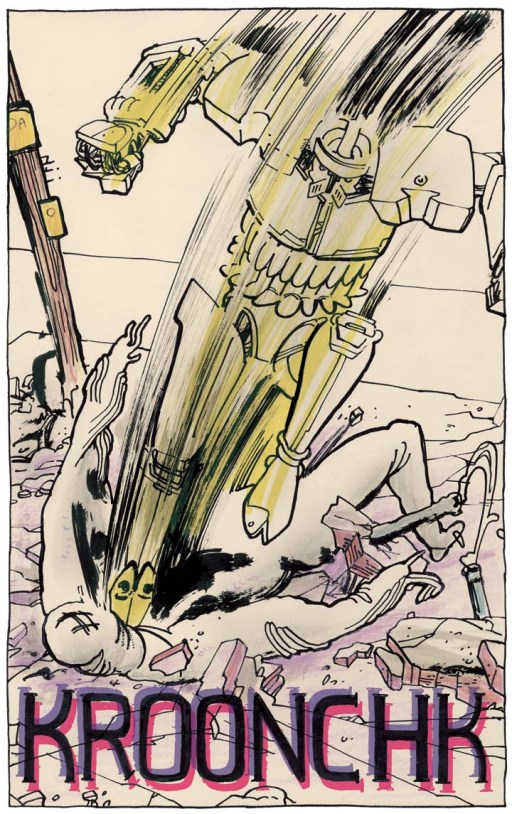 In short, this is the most fun and excitement I’ve gotten out of a comic book in a long time. If this was the kind of stuff your average superhero or action comic was made up of, I can’t help but think that the industry would be in a slightly better state than it is. If you don’t own the first three Copra issues, then please don’t hesitate to pick up a copy of this delectable edition!

This entry was posted in Comics, Reviews and tagged Comics, Michel Fiffe, review. Bookmark the permalink.